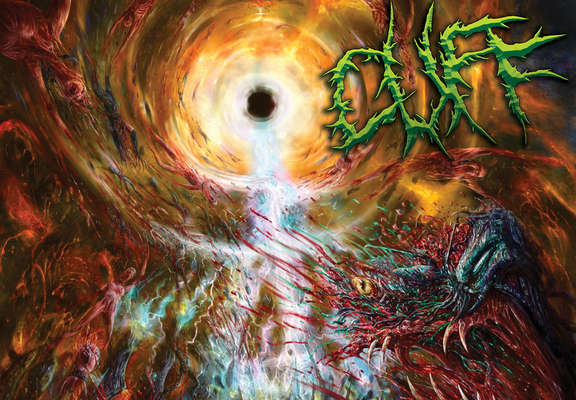 Transient Suffering Through the Ergosphere 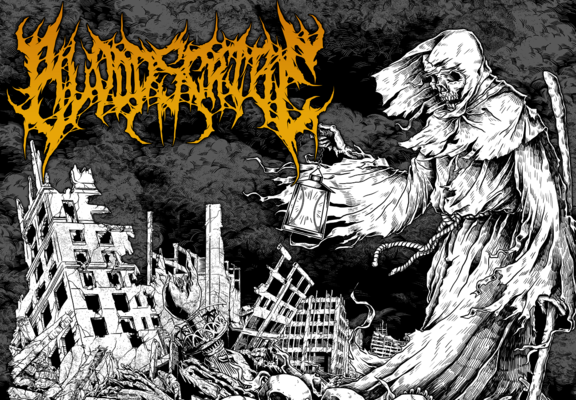 Prologue to the Apocalypse

After 10 years of performing and developing their sound, Los Angeles hard-hitters BLOODSCRIBE, graces their fans with their long anticipated debut album “Prologue to the Apocalypse”. Blending multiple genres of Death Metal, BLOODSCRIBE has assembled a unique tone that can easily be described as a destructive “in your face” sound; easily enjoyable for all extreme music lovers.

Featuring album art by Indonesian illustrator Mondo Borneo, “Prologue to the Apocalypse was recorded, mixed and mastered by Chris Garcia at the Morgue Music Studio (Stages of Decomposition) in Los Angeles CA. 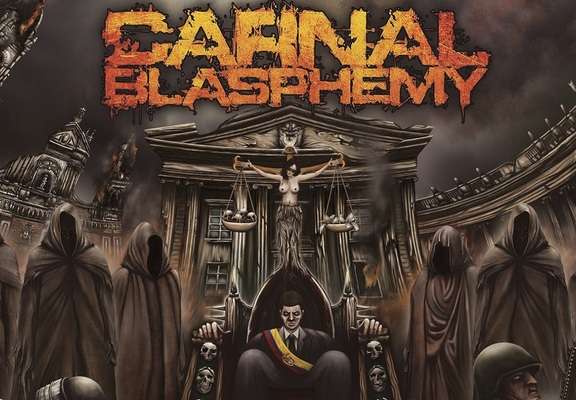 CARNAL BLASPHEMY are no strangers to executing extreme death metal. Since 2005, this Colombian powerhouse has utilized political injustice, as their main fuel to writing music. After various self-released demos, CARNAL BLASPHEMY’s debut full length Liars Made Authority is set to lead the blind out of corruptions path and into riot gear! 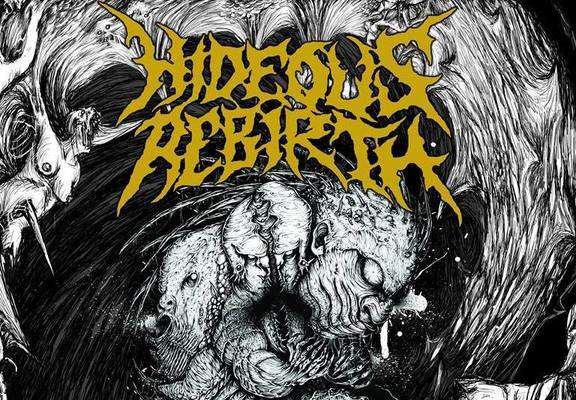 “Completely Devoured is fast, hectic and more importantly, you can bang your fucking head to it”. 8.5/10 -Headbang or GTFO 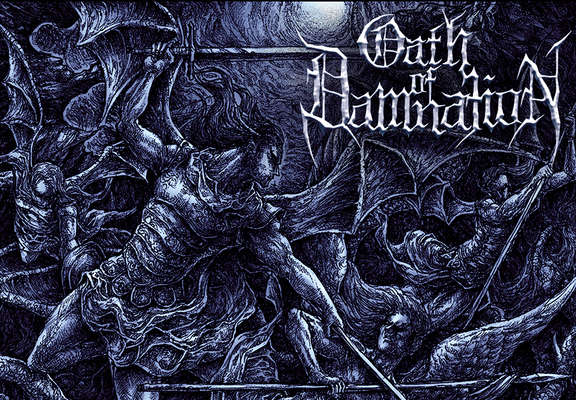 by Oath of Damnation

Imhullu Play
The Abortuary Play
Ardenti Haereticus Play
With Fire And Malevolence Play
To Crack The Earth And Bring Down The Sky Play
In Death's Dominion Play
I Curse Thee, O' Lord! Play

Featuring album art by Jenglot Hitam, ‘Fury and Malevolence’ was Recorded, Mixed and Mastered by Andy Kite (Hidden Intent, Meth Leppard, Splatterpuss) at Against the Grain Studio, in Adelaide, Australia. 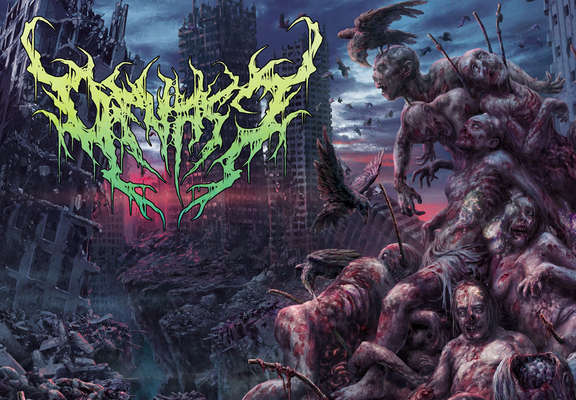 Apocalyptic Human Extinction is the 3rd studio release by the Argentina-based technical death metal powerhouse, DEVAST. Their newest offering is nothing short of what the bands is known for – Extreme Technical Brutality in the veins of early Severe Torture, Hate Eternal, Hour of Penance, and more. 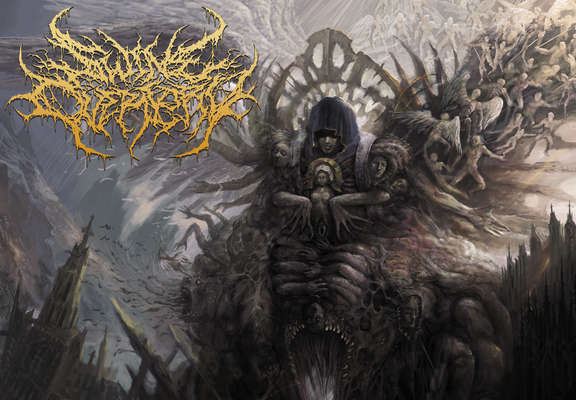 “Entheogenesis” is the highly anticipated follow-up to Swine Overlord’s debut album “Parables of Umbral Transcendence”. The brutal death metal duo who dared to create their own blend of American slam with a slight progressive touch, has returned without any signs of changing paths. With “Entheogenesis,” the band goes one step further by formulating their own fresh brand of progressive death metal, and taking their writing to another level. Swine Overlord has crafted a layered concept album which offers a unique look at the development of the human psyche through the lens of western religion and eastern spirituality. This epic story is told over a soundtrack filled with their trademark slams, ominous riffing, as well as mind-bending soundscapes and enough twists and turns to keep fans eager to hear what’s coming next. Featuring album art by renown Chinese artist Yang Guang (Equilibrium, Putridity, Inanimate Existence), “Entheogenesis” was recorded at SO HQ and was mixed and mastered by Andrew Matzenger. The album also includes special guest appearance by Tim Bee (Paroxysmal Butchering) and Jord James (Disentomb). 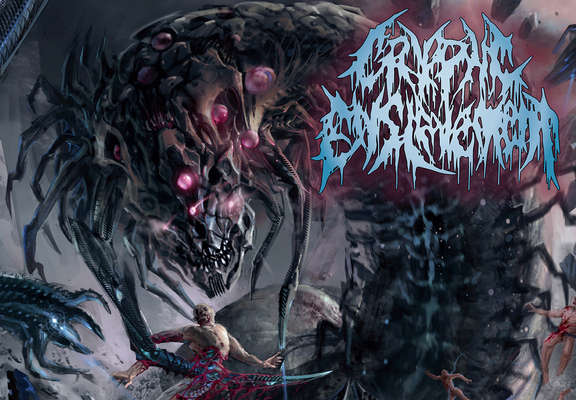 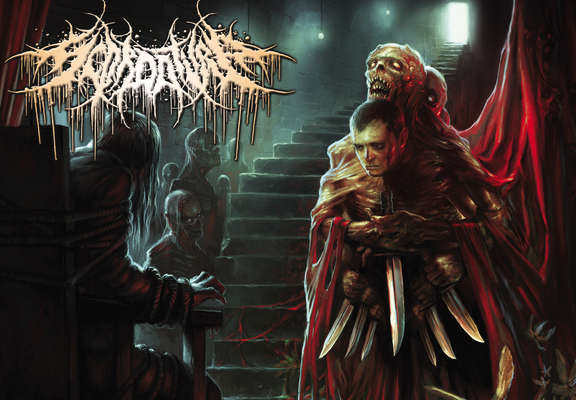 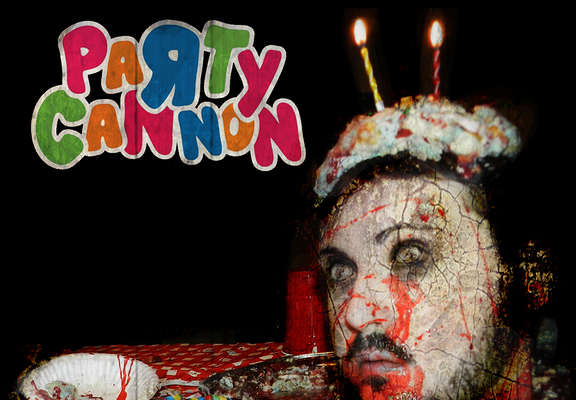 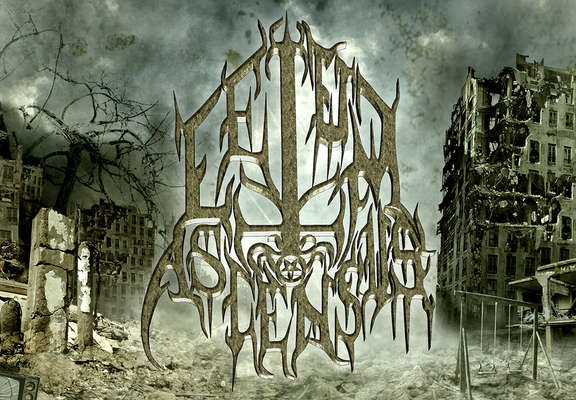 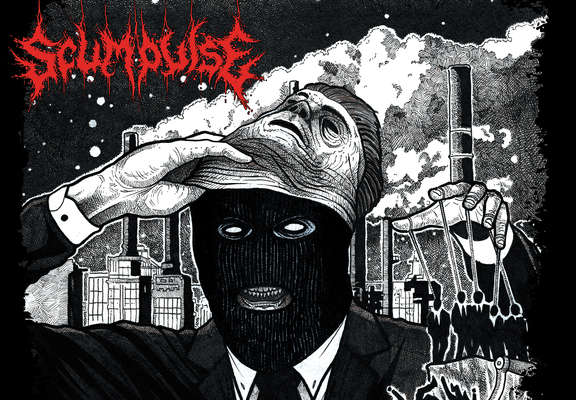 Scottish quartet, SCUMPULSE has come to unleash one of the most anticipated albums to come from the Gore House compound. ‘Rotten’ delivers eight punishing tracks of perfectly blended blackened-grind. The “Carcass meets Darkthrone” style can be best described as a savage, bone-crushing, sonic assault.

Featuring art by Kasper “Sandullos” Povlsen, ‘Rotten’ was recorded between Black Cave Recordings, Chamber Studios and s9fifty, and mixed/mastered by Andrew Rankine. Be forewarned, ‘Rotten’ the debut album not to miss. 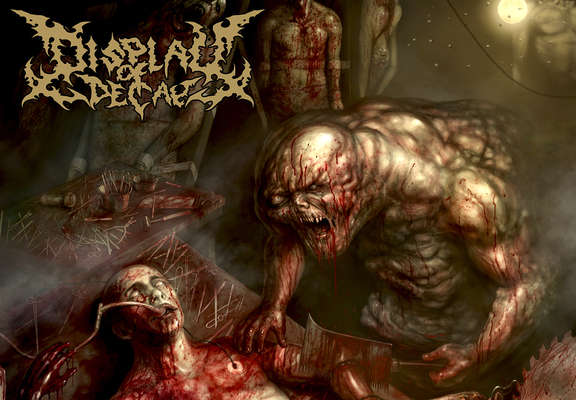 by Display of Decay

Celebrating 10 years since their inception, Display of Decay shows no signs of deceleration. ‘Art in Mutilation’ marks the bands latest chapter and their 5th studio offering. Widely noted for bringing a unique blend of old school death metal, the Edmonton based quartet delivers 8 new tracks of premium, punishing death metal for fans of Cannibal Corpse, Monstrosity, Malevolent Creation, and more. ‘Art of Mutilation’ showcases the crews most vicious material to date

For $8 Minimum You Also Get 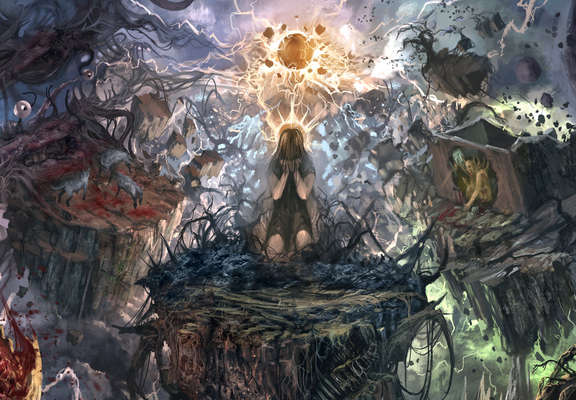 This Slam Avalanche features album art by Pedro Sena (Analepsy, Ingested, Putrid Pile), and was recorded, mixed and mastered by Mike Simon in Tomales, CA between 2015-2018. 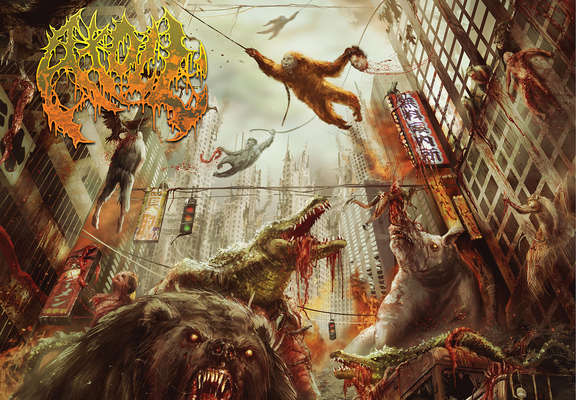 Zoopocalypse’ offers 11 new tracks of Neck-breaking Death Metal. Drawing from a wide range of influences, ATOLL has spawned a diverse blend of groove driven brutality. As a strong follow-up to 2017’s ‘Fallout Frenzy’, it proves there is no slowing down in this Slamming Quintets’ horizon. Sonic maturity becomes noticeable track after track, and the musical diversity performed on this album, sets them apart from todays common death metal trends. This is one for the hard hitters! 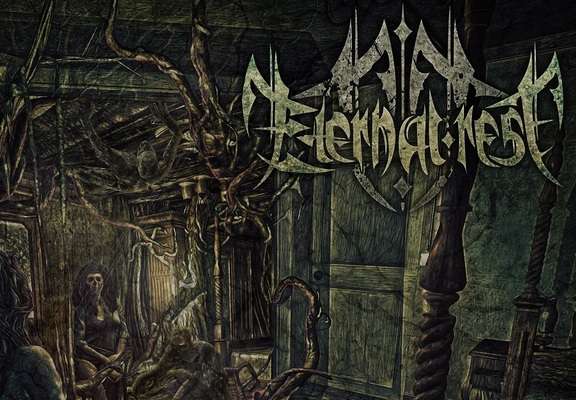 The Picture of Hatred

Sanctuary Alight Play
This Will All End In Violence Play
Obscured Faith Play
The Will Of Death Play
Chained To Nothing Play
The Painted World Play
The Picture Of Hatred Play
Water Me Not Play
Walk With Me Play
Awaken, O Fury Play

Australian Death Metal Quartet, ETERNAL REST is back with their 3rd full length album, “The Picture of Hatred”. The album marks 10 years since the band’s debut EP, ‘Seize of Anubis’’. While the years come and go, ETERNAL REST continue to exhibit a passion to produce well-crafted, extreme music. “The Picture of Hatred” offers 10 new tracks of Vibatiously-Dark, Intense, Death Metal for fans of early Nile, Behemoth, Brutal Truth, and so on.

Featuring album art by French Illustrator Remy Cooper (Katalepsy, Thy Art Is Murder, Whitechapel) “The Picture of Hatred” is was produced by Eternal Rest in Brisbane, Australia, and was Mix/Mastered by Dan Swanö at Unisound (Bloodbath, Incantation, Pestilence) in Sweden. 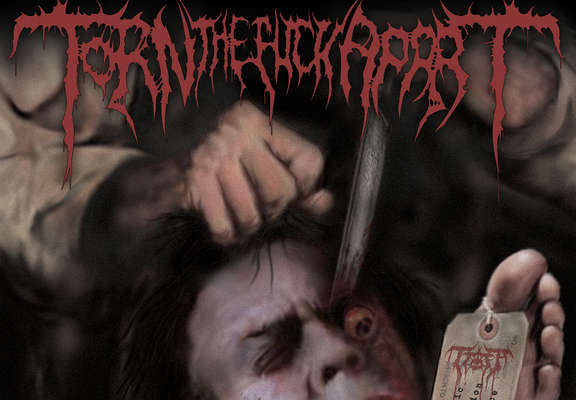 A Genetic Predisposition To Violence

by Torn The Fuck Apart

Kansas City Brutal Death Deviants, TORN THE FUCK APART return with their fourth full-length album, ‘A Genetic Predisposition to Violence’. The highly anticipated studio offering comes baring 10 new tracks of T.T.F.A.’s technical/brutal death blend. ‘A Genetic Predisposition to Violence’ is the perfect album for any horror soundtrack fanatic; captivating listeners from start to finish, leave you in a state of gruesome sonic delight.

by Oath of Damnation

Imhullu Play
The Abortuary Play
Ardenti Haereticus Play
With Fire And Malevolence Play
To Crack The Earth And Bring Down The Sky Play
In Death's Dominion Play
I Curse Thee, O' Lord! Play

Featuring album art by Jenglot Hitam, ‘Fury and Malevolence’ was Recorded, Mixed and Mastered by Andy Kite (Hidden Intent, Meth Leppard, Splatterpuss) at Against the Grain Studio, in Adelaide, Australia. 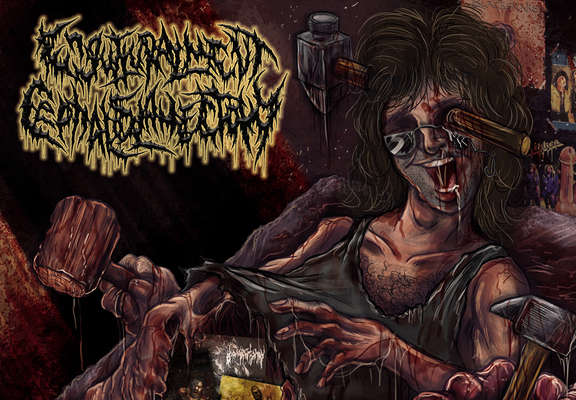 Worthless Intro You Will Skip Play
Knights In Slammin' Service Play
My Studies at the Slamming Brutal Death University Play
Some Kisses Play
8.1.2. and Life (Pitriffs Gone Wild) Play
I Bless The Slams Down In Africa Play
10,000 Slam Thots (In One) Play
Overnight (Slammin' Brutal Death Metal) Sensation Play
Pour Some Pitriffs On Me Play
No Ghey Black Metal (Only Good Shit) Play